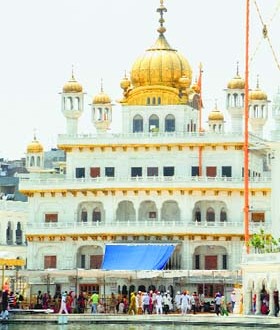 Amritsar, Punjab: Akal Takht today announced that Guru Gobind Singh’s birth anniversary (Gurpurb) will be celebrated on December 28 as per the amended Nanakshahi calendar. Earlier, the Sikh clergy had decided to celebrate Gurpurb on January 7.

“We have received a number of e-mails, saying preparations for celebrating the event on December 28 had already been made,” he said, clarifying that he was in favour of making the necessary amendments in the calendar so as to clear all confusion once and for all. He said he had already suggested setting up a panel comprising experts and Sikh intellectuals to resolve the issue.

Last week, the Sikh clergy had decided to change the Guprurb’ date from December 28 to January 7 in view of the fact that it coincided with the Martyrdom Day of the Sahibzadas (Tenth Guru’s sons). The clergy’s move had drawn flak from various quarters.

Sources said the SGPC too had suggested January 5 as the alternative date for celebrating Gurpurab, but the Sikh high priests had opted for January 7.

The rift in the Sikh community came to the fore after the Sikh clergy at Takht Shri Patna Sahib made it clear that they would celebrate Gurpurab on December 28. Even the Delhi Sikh Gurdwara Management Committee (DSGMC), which is also ruled by the SAD, decided to celebrate Gurpurb on December 28, saying they had already booked Lakhi Shah Vanjara Hall for the purpose.

About the calendar controversy