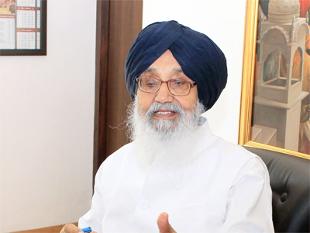 While interacting with mediapersons on the second day of the thanksgiving tour in Talwandi Sabo assembly constituency, the chief minister said that the issue of a separate committee was under judicial review in the Supreme Court and any move to form the Haryana Sikh Judicial Commission would not only be legally incorrect but also ethically wrong.

The chief minister said that the Congress has always followed it sage -old policy to divide and rule wherein it has divided states and people to r ule over them.

The chief minister said that Haryana’s chief minister Bhupinder Singh Hooda was taking such wrongful steps at the behest of the Congress high command to divide the Sikh community in different states and taking decisions against them.

Holding the Congress responsible for hatching a conspiracy, Badal said that while the matter was sub judice in the court, it was illegal to form the commission and appoint office-bearers of the same.

He added that the Hooda gover nment was supporting the leaders demanding a separate committee whom the Sikhs of Haryana have already rejected by giving them a crushing defeat leading to even forfeiture of their security deposits during the general elections of the Shiromani Gurdwara Parbandhak Committee (SGPC).

The chief minister reiterated that SGPC represents the Sikhs and its foundation has been laid on the sacrifices of thousands of Sikh martyrs. He added that in Maharashtra the, the state Congress gover nment has marginalised representation of the SGPC on the Takht Sri Hazoor Sahib Board yielding to nefarious designs of the Congress high command and has given proof of being Sikh.

On the issue of Georgia refusing visa to Punjab farmers, the chief minister said that though such international issues were the responsibility of the union government, he would urge the Centre to intervene in the issue so that the interests of Punjabi farmers, who have made agriculture investments in Georgia, were safeguarded.