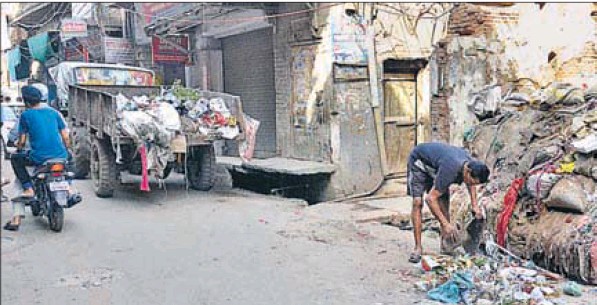 Comments Off on Cleanliness drive near Golden Temple 895 Views

Amritsar, Punjab: A day after a meeting with the Shiromani Gurdwara Parbandhak Committee (SGPC) president and senior office-bearers, the municipal corporation on Thursday began cleaning around the Golden Temple.

On Wednesday, municipal commissioner Pradeep Sabharwal had shown the plan to with the SGPC president. “The aim is to give the visiting devotees a clean environment,” said Sabharwal.

The MC will focus on four areas initially. The approach road from the Hall Gate, and the routes from the shrine to Sikandri Gate, Ghee Mandi, and Sheranwala Gate are the zones to be made garbage-free. The teams will word from 6am to 10pm each day.

The civic body has placed 18 new dustbins at these locations, and pressed two-auto rickshaws, four tractor-trailers, six bicycle rickshaws, and 10 handcarts into action for lifting the waste.

The SGPC had earlier shared with the municipal corporation its concern about unsanitary conditions around the Golden Temple where thousands of devotees come to pay obeisance every day.

At a meeting in Fatehgarh Sahib on August 23, members of the SGPC executive had even decided to take up the cleanliness task in own hands. Municipal commissioner Sabharwal added that the civic body was doing its best to keep the city clean. “The scenario is likely to improve when night sanitation resumes in a few days,” he said.

Previous: Sikhs ATTACKED In Pakistan – 8 Arrests Made
Next: Eight arrested in attack on Sikhs in Peshawar