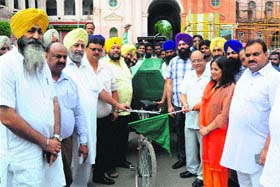 Comments Off on Cleanliness drive: Municipal Corporation in top gear; SGPC silent over the move 593 Views

Amritsar, Punjab: Though the Municipal Corporation (MC) is in top gear to conduct a cleanliness drive around the Golden Temple, yet contrary to the expectations, the Shiromani Gurdwara Parbandhak Committee (SGPC), which had announced to take care of the cleanliness of the holy shrine’s vicinity, is nowhere in the picture till now.

Apparently, peeved by the unhygienic conditions in and around the Galliara and blaming the MC of being negligent in performing its duties, the SGPC president, Avtar Singh Makkar, had conducted meetings with SGPC officials. He had announced on August 26 with much fanfare to take up the cleanliness drive at the Shiromani Committee level from September 1. A dedicated task force was also to be constituted to take care of the drive.

Ironically, following the announcement, the MC officials, led by Commissioner Pardeep Sabharwal, had given a call to join hands with the SGPC’s move. The SGPC president had then remarked that since the MC had failed in performing its duties, the drive would be headed by the SGPC only, with or without the MC.

The SGPC had also given a clarion call to the residents living in the vicinity of the Golden Temple to help in its mission to maintain the cleanliness. The residents had expected that with the SGPC taking up the cudgels, the results would be much better, but that was not to be.

Earlier, the SGPC president said the cleanliness drive could not be started in the wake of the Parkash Utsav of Shri Guru Granth Sahib on September 1. The staff and officials would be busy with the preparations for the grand occasion, he added. However, till date, the SGPC’s drive has not seen the light of the day.

On the other hand, the MC team, under the supervision of Commissioner Sabharwal, has been on toes to maintain cleanliness and sanitation in streets leading to the Golden Temple.

Health officer, Dr Charanjit Singh, said the cleanliness drive would be conducted daily from Hall Gate to the Golden Temple, from the Golden Temple to Sikandari Gate, Galliara, Malka, But Chowk to Sheranwala Gate and from Jallianwala Bagh to Ghee Mandi Chowk.

The MC had introduced extra workforce and machinery yesterday to expedite the cleanliness operation. According to information, the MC pressed into service at least four new tractor-trolleys, 10 rickshaws, two auto-rickshaws, five hand carts and 18 new dustbins. Besides, 30 safai karamcharis were deputed to take care of this particular area.

The SGPC spokesperson, Kulwinder Singh, said, “There has been a delay in launching the cleanliness drive because the sanitation machinery like three garbage lifting trolleys with jacks, besides other supporting equipments, are yet to be arranged.”

Previous: Why are Afghan Sikhs desperate to flee to the UK
Next: Sri Akal takht and SGPC Jatehdars stay away from Bhai Dilawar’s bhog