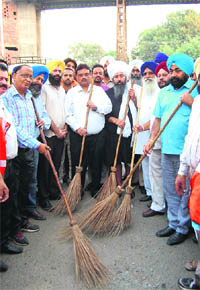 In the first phase, the trust took up two major routes leading to the Golden Temple and its vicinity. Councillor Manmohan Singh Titu, who initiated the process to form the Holy City Trust, said volunteers associated with them had started cleanliness drive on the Golden Temple routes, which included Ramsar Road, Chattiwind Gate, Laxmansar Chowk and another route from Shaheedan via Baba Atal to the Golden Temple.

Spokesperson of Bhai Bhurewala Sect, Ram Singh, said they were already making efforts to sensitise the residents about maintaining cleanliness around them. “We have already put into service around 16 persons, who sweep routes leading to the Golden Temple from 10 pm to 5 am. Another batch of volunteer does the job from 10 am to 5 pm. Devotees from New Delhi joined our campaign yesterday. We will shortly provide special dustbins and polythene bags to the residents. Our main focus is on the area around the holy Sikh shrine,” said Ram Singh.