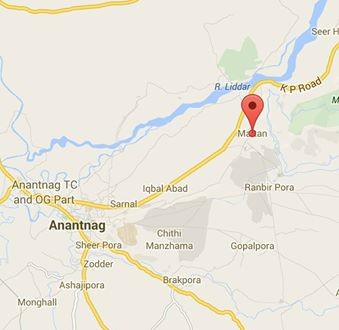 Comments Off on Clash leaves several hurt in Mattan 782 Views

Islamabad, Pak:  Several people were injured after members of Sikh and Hindu communities allegedly attacked each other here in Mattan area of this South Kashmir district. However, police intervention saved the situation from turning ugly.

Reports said that there has been a dispute between the two communities over a piece of land that houses a Gurduwara and the Surya temple in Martand. The case is pending in the apex court and a status quo has been issued barring both the communities from raising any new structures.

The situation turned ugly when the move to replace the Nishan Sahib, a flag pole erected outside the Gurduwara, by the local Gurudwara Prabandhak Committee was opposed by the Surya temple management.

Gurduwara Prabandhak Committee alleged that they were attacked by the members of the temple management with stones injuring several among them.

“We were just replacing the damaged flag pole and nothing else. But the temple management hurled abuses at us and attacked us with stones due to which several of us suffered injuries,” said the members of the committee.

They further alleged that the other community has been carrying on major constructions in violation of the Supreme Court order.
The members of temple management however denied the allegations of stone throwing.
“Yes we did oppose the replacement of Nishan Sahib but we never resorted to any violence,” said the members of Surya temple management.
Reports said that police intervention prevented further escalation in tension. “Yes there was some tension between the two communities but the situation is totally under control now,” said SHO Mattan, Bashir Ahmad.
Meanwhile Deputy Commissioner Anantnag, Swagat Biswas, visited the spot and pacified both the communities.
“The issue between the two communities has een solved amicably,” said an official.

Previous: SGPC deliberating on recycling used water
Next: Statue or no Statue, the cat is out of the bag as far as Gandhi is concerned: Sikh Federation UK