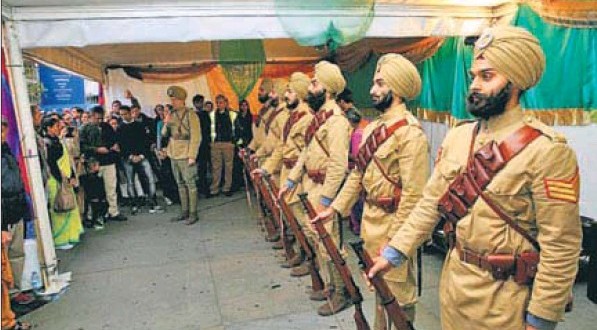 Comments Off on Century on, 15th Sikh Ludhiana regiment to come alive in UK 1,621 Views

Chandigarh: The recreated 15th Sikh Ludhiana regiment would participate in the Lord Mayor’s Show in London on Saturday.

A part of the National Army Museum’s (NAM’s) ‘The War and Sikhs: Road to the Trenches’ project, the recreated regiment is made up of volunteers from the British Sikh community, who, following a callout by the museum — via Twitter, the media and word of mouth — have been attending training sessions in order to fully integrate themselves with life exactly as it would have been for the soldiers during World War 1.

About eight volunteers will ride on the top deck of the B-type battle bus to recreate an old image from the war, showing Indian soldiers being transported to the Western front.
During the procession, the volunteers will not only talk to the public about the sacrifices made by Indian/Sikh soldiers but also about their own experience, being in uniform accurate to 1914.

The volunteers had undergone an intense training session in June during which they received briefing from experts about the significance of the project as well as a historical overview of the 15th Ludhiana Sikh Regiment and what life would have been like as a soldier or sepoy in 1914.

The volunteers have also been kitted out in replica uniform: from boots to buttons, every detail of the regiment’s dress have been captured.

They have also received extensive training in drill, rifle-handling techniques and how to tie a military turban.

Project officer Jasdeep Singh said: “I wanted to help British Sikhs engage with the history of World War 1 more actively, to physically mark the Sikh contribution to the conflict. It’s by enabling our volunteers to experience the uniform, food and living conditions of the regiment that we really bring the Indian Army’s WW1 story to life. In taking the recreated regiment all over the country, we’ll continue to raise the profile of this vital part of the British force in World War 1.”

Dressing up like a soldier was an experience of a kind for the volunteers. For many, the significance was something they already felt keenly, having ancestors who fought as part of the Indian Army — and in some cases even the 15th Ludhiana Sikhs itself.

“Wearing this uniform for the weekend has given me a tiny glimpse of what it was like to be a soldier in WW1. Now I appreciate their contribution and sacrifices even more,” said Aman Singh, a volunteer.

The trained volunteers will now attend various events around the UK, to share their knowledge and experiences. They will showcase cooking techniques, using rations that the regiments would have received, and demonstrate battle tactics and weaponry.

They are all set to attend a special event at the House of Parliament in London on November 10.

The recreated regiment has already attended various events, including historical enactment, across the country from Scarborough Castle to Dover Castle.

The 15th Sikh also attended the annual ‘Diwali on the Square’ event held at Trafalgar Square that was attended by 40,000 people.