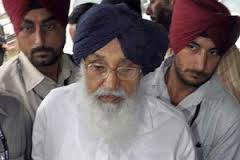 Ludhiana, Punjab: Punjab Chief Minister Parkash Singh Badal accused the central government of India of usurping the power of the states over the years, saying the authority of the state governments has been eroded by doing this. He was speaking at a state level function organized to mark India’s Republic Day on 26 January.

In his address after hoisting the India’s tri-color flag on the 65th Republic Day in the industrial city of Ludhiana, Parkash Singh Badal reportedly said the state governments could not take enough decisions even in fields like education, agriculture, health and others.

“State governments are unable to take decisions for the welfare of people as the centre has usurped the powers of states. There is an immediate need to give these powers back to the states so that they can act for the welfare of the people,” Badal reportedly said.

It may be recalled that Badal Dal has been extending unconditional support to Bhartiya Janta Party (BJP) over years, which is also hostile to the powers of the states. BJP had been opposing special status to Jammu and Kashmir, which shows that it was against the idea of granting autonomy or more powers to the states.