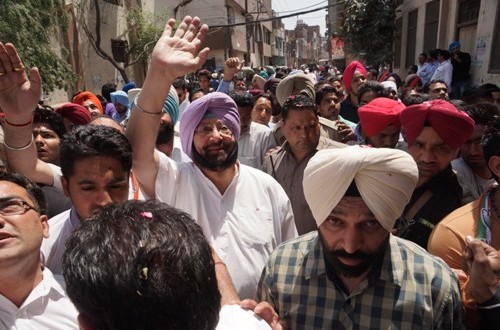 In an open letter to Modi, Amarinder said, “I have learnt that you are coming to the holy city of Amritsar tomorrow. At the outset, let me remind you of your promise about the Punjabi farmers in Gujarat you made at Jagraon rally on February 23, wherein you had publicly committed, albeit vaguely, that nobody will be forced out of Gujarat”.

Amarinder further wrote, “Everybody in Punjab assumed that your government will withdraw the appeal against the Gujarat high court verdict that goes in their (Punjabi farmers’) favour. Till now, your government has not done anything, not taken any initiative which could reveal your sincerity in meeting that commitment. This is also very important for your credibility since you are dreaming too big”.

Referring to chief minister Parkash Singh Badal, he added, “Let me also brief you about your alliance partners in Punjab. Parkash Singh Badal, who is a congenital liar and must have lied to you, nobody knows how many times, belonged to a humble farmer’s family with just 80 acres of land. Now his properties are worth billions of rupees”.

He further said, “While nobody knows the real secret of their humungous wealth, there is a general idea that they have grabbed each and everything in Punjab which they think can earn them money”, he added.

Amarinder said, “Given the fact that they are your friends, I am sure you won’t be aware about all this since friends don’t like to ask questions. But I thought I should better update you with a brief background of your allies in Punjab and the impression people carry about them and also wanted to know whether you have come here to give your stamp of approval to all this?”

EX-SERVICEMEN CAUTIONED
Meanwhile, Amarinder cautioned the ex-servicemen against the war mongering rhetoric of the BJP leaders like Narendra Modi.

Previous: Hemkund Sahib yatra from May 25
Next: American-Sikh man prevented from carrying ‘kirpan’ on jury duty