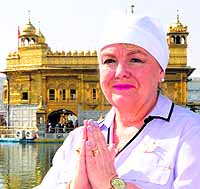 Manjit Singh, secretary of the Shiromani Gurdwara Parbandhak Committee along with Daljit Singh Dedi and Mahinder Singh Ahli, additional secretaries, honoured the minister with a siropa (robe of honour), a model of the Golden Temple and a set of religious books.

Speaking to mediapersons, Kerry said it was for the first time she visited the Darbar Sahib and found it very peaceful place. “I hope to visit again,” she added. Kerry said there were only two per cent Sikhs in Canada, but they had contributed a lot for the development of the country. She was impressed with the service at the community kitchen where lakhs of devotees partook langar.