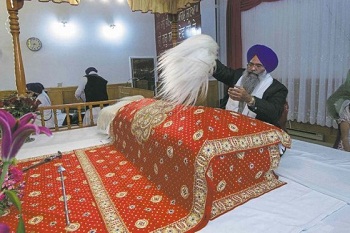 Winnipeg, Canada: Hundreds of Sikhs turned out at a Gurdwara Sahib in northwest Winnipeg Thursday (Nov. 13) to as the 25 Saroops of the Guru Granth Sahib arrived there. Worshipers lined up to bow their head before Guru Sahib.

“Today is a very historic day for the Sikh people in Manitoba,” said Harbans Singh Brar, president of the Sikh Society. “There are eight Gurudwaras in Winnipeg and they wanted more saroops of the Guru Granth Sahib for their congregations and programs,” Brar said. The eight Gurudwaras in Winnipeg serve a community of about 10,000 Sikhs, according to Statistic Canada’s 2011 National Household Survey.

In recent years, the Sikh community and, consequently, the congregation at the Sikh Society, has been growing. “We’ve seen a number of our functions just grow in size. Because of that we’ve had a multimillion-dollar renovation happen in the basement,” said Jasdeep Singh Devgan, a member of the society’s board. “It’s affected us really positively.”

Previous: Akal Takht, SGPC pass the buck on calendar row
Next: Takht : Efforts on for release of Sikh detainees