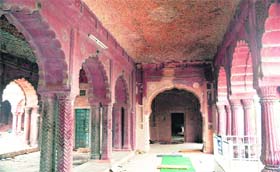 Amritsar, Punjab: Even as the restoration work of the historic Bunga Ramgarhia seems to have come to a grinding halt, the SGPC authorities say the work has slowed down a bit and is all set to enter its final phase soon.

Talking to The Tribune, SGPC officials, who are looking after the project, said the restoration work would soon enter into the third phase in which the work on flooring would begin.

Besides, the work on lighting on its four floors will also commence along with it. The authorities are planning to put up special lights to properly project different parts of the historical monument.

According to sources, the plan to have a museum inside the Bunga Ramgarhia has been changed.

It will now be preserved as a heritage building and will be thrown open to devotees once its restoration work is complete.

The Bunga’s basement accommodates a hall where Maharaja Jassa Singh Ramgarhia used to hold his court — ‘Diwan-e-Khas’. The royal seat of the Maharaja at ‘Diwan-e-Khas’ has been kept much lower than the Harmandar Sahib, which testifies the faith and respect he had in the Guru.

The basement also has a prison and a treasury room, besides a well. The middle basement and the lower basement have a room each.

Meanwhile, the Ramgarhia community leader Onkar Singh Sandhu said they would like to see an entry point leading to the Bunga through the ‘parikarma’ of the Golden Temple so that the pilgrims may see it while paying obeisance at the holy shrine.

He said it would turn out to be a big draw among the pilgrims just like the Central Sikh Museum. He felt that if its entry point was made from some other side, it would affect the number of people visiting it.

He also demanded that a museum be set up inside it as per the previous plan to depict the history of Maharaja Jassa Singh Ramgarhia.

Those associated with the project say they are making it sure that the originality of the structure is retained as much as possible. However, the left wing of the building has already suffered on this count as a few years back the roof was built afresh by a baba performing the ‘kar sewa’.

Those engaged in the ‘kar sewa’ had also built walls under the arches on the ground floor and fixed doors to convert verandahs into rooms. The brickwork (Nanakshahi bricks) was plastered and painted at many places.

However, now, the restoration work is being carried out in consultation with conservation experts. The work on the project started on April 18, 2008, and those working on it attribute the delay to intricate work involved in restoring the structure.

It is structurally supported on parabolic arches decorated with cornices and the projections are supported by architraves and brackets.

Two minarets of 156 feet each, which were constructed for surveillance in and around the Golden Temple, are also a part of it.

During the brief occupation by the Khalsa army, Sardar Ramgarhia removed the royal throne. He fettered it with chains and ropes and brought it to Amritsar to present it before the Almighty as a war prisoner.

Presently, the seat of the throne measuring six feet in length, four feet in breadth and nine inches in thickness is placed in a tilted position, symbolising its surrender before the Golden Temple, on the ground floor of the Bunga Ramgarhia.

The roof of the ground floor is supported by 44 red stone pillars brought by Maharaja Ramgarhia from the Red Fort.