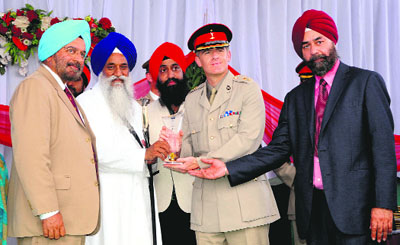 Comments Off on Book on Battle of Saragadhi released, soldiers’ families awarded 983 Views

Amritsar, Punjab: Commemorating the Battle of Saragadhi, known as one of the greatest ‘last stands’ in military history, US- based author Gurinderpal Singh Josan launched his book titled, “Saragadhi”, at an event held at the International Fateh Academy. Celebrating the heroics of 21 soldiers against charging 10,000 Pashtuns, the book launch was accompanied by a cultural ceremony. Families of the soldiers were also awarded.

Presiding over the event, ex-Army chief Gen JJ Singh (retd) was the chief guest along with members of the British Army delegation. Describing the Battle of Saragadhi as a unique example of valour and bravery, the ex-Army chief said that sacrifices made by the Sikh Regiment should be valued by the future generations and descendents, so that the fruit of freedom could be enjoyed.

Titled “Saragadhi”, the book traces the history of the battle with pre-and post-event details, the author said, adding that that it took him over two decades to put all the facts in the right place. “As a teacher of ‘gatka’ and martial-art forms, I was always intrigued by the superhuman courage that those 21 Sikh soldiers exhibited at Saragadhi. The process of researching for the book started way back in 1995 when I decided to trace the history and the families of the soldiers of Saragadhi. By 1997, I had found 19 families and I started to pen down the details,” he said.

Josan, who runs his school of gatka and martial arts in the US, Nepal and the UK, has given a vivid account of the battle in the book along with mentioning the family descendents of the Saragadhi soldiers. “It also has some rare pictures of the time, and of a time before the battle was fought and some details shared by the British Army that has a special room full of texts, pictures and information in memory of the 21 soldiers,” said Josan. The book launch was followed by the screening of a documentary on Saragadhi made by Josan’s 15-year-old son, Japjot Singh Josan.

As for the families that have been proudly saving their brave history, it was their moment of glory. “It’s a matter of great pride that our great grandfather’s heroics are celebrated. Till date, the families of the martyrs of Saragadhi were living in oblivion. But the event had brought in all those proud memories back,” said Kulbir Singh, one of the honoured family member. Josan added that we need more efforts to keep alive the legacy of our brave soldiers. “No attempts from the state or otherwise have been made to help or trace the families of the martyrs. One of the two memorials build to commemorate the battle in Amritsar is a picture of neglect. We need more efforts to keep the glory of our past alive, like the British, who have still preserved the Saragadhi memorial.”