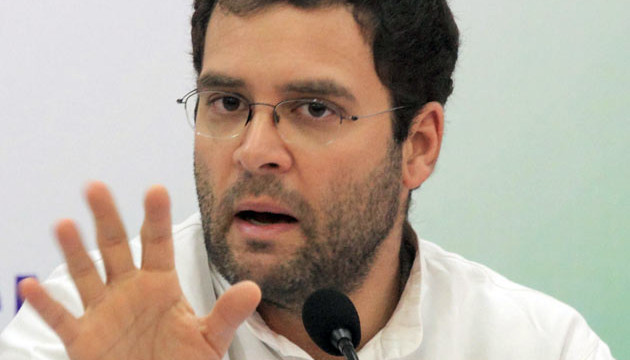 BJP rebuts Rahul, says 1984 victims yet to get justice

Comments Off on BJP rebuts Rahul, says 1984 victims yet to get justice 483 Views

New Delhi: Congress vice-president Rahul Gandhi’s comments on the 2002 Gujarat riots and the 1984 Sikh genocide drew sharp remarks from the BJP amid demands that Rahul express regret for his statements made in his first TV interview on Monday.

BJP leader Arun Jaitley asked whether Rahul had anything to offer to this country or was “too confused to get into the specifics and therefore goes into the generalities”. Earlier in the day, Delhi chief minister Arvind Kejriwal landed in trouble for retweeting music director Vishal Dadlani’s tweet: “Stuck between a moron and a murderer….what now, India!?”

Dadlani had made the comment on Monday evening after watching Rahul’s interview. The AAP struck a defensive note after the BJP lashed out at Kejriwal, insisting that the retweet did not imply that he endorsed Dadlani’s tweet. “Being a CM, he should be doubly conscious of what he endorses,” said BJP spokesperson Nirmala Sitharamam. In his interview to Times Now, Rahul had held Modi responsible for the 2002  genocide  but rejected suggestions that the Congress too would have to similarly take the blame for the 1984  genocide .

Questioning Rahul’s comparison of the 1984 and 2002  genocide , Jaitley said: “Congress leaders were seen leading the mobs in 1984. Sikhs were massacred at thousands of places. Nowhere did the police fire a single bullet to disperse mobs. Cases were not investigated. Justice evades the victims even now. Where did Rahul get this idea that in 1984 there was no participation of the state?” On Gujarat, Jaitley said, “Almost 300  genocide were killed in police firing. Thousands of prosecutions were filed.

Hundreds of people have been sentenced. Modi personally went through several inquiries including the Supreme Court constituted SIT and no evidence was found against him.”

The Cong ress, however, firmly dismissed the BJP-led offensive, pointing that a large number of convictions had taken place in the Sikh  genocide  while the post-Godhra court cases had to be transferred from Gujarat for justice.

“Criminal law does not make a distinction between common people and leaders of parties… 482 convictions took place in 1984  genocide . The political career of a number of senior Congress leaders was affected. Apart from apology, there has been reconciliation for the last 20-30 years,” party spokesperson Abhishek Singhvi said. Meanwhile, BJP deputy leader in RS, Ravi Shankar Prasad called Rahul’s “irresponsible” comments on Modi condemnable and demanded that Gandhi express regret, “It is a textbook case of speaking a lie. The people of the country will reply to this”.