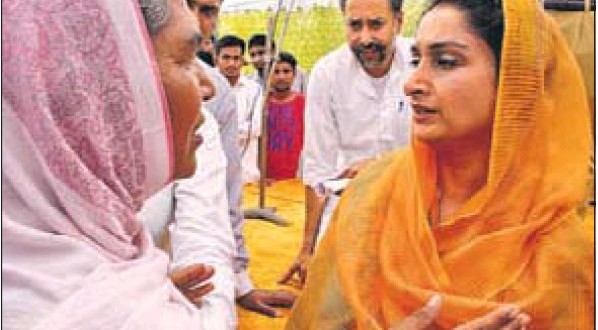 Bhullars in land dispute with SGPC: a worry for Harsimrat

Comments Off on Bhullars in land dispute with SGPC: a worry for Harsimrat 1,035 Views

Bathinda, Punjab: The Bhullar community may be a cause of concern for the SAD candidate from the constituency as it has been taking the prestigious poll battle within the Badal dynasty here as an opportunity to correct the alleged misperceptions about a 17th century defeat involving sixth guru of Sikhs Guru Hargobind Sahib with the help of its electorate’s strength.

At present, the community is involved in a legal battle with Shiromani Gurdwara Prabhandak Committee (SGPC) over the possession of Gurdwara Mari Sikhan Wala on the Rampuraphul-Mehraj road in the district.

The community held many protests in the recent years over the issue after the SGPC attempted to take possession of the gurdwara land in 2010. Section 45 and 46 are imposed to avert any further clash on the disputed land.

Rounds of meetings of Bhullars with the Punjab chief minister and the deputy CM were also held, but the incumbent government failed to come out with a solution. Bhullars claim to have a strong vote bank in 400 villages of Punjab and they are opposing SAD candidates in Bathinda, Sangrur and Faridkot. “We have set up committees in 345 villages across the state. 95 fall in Bathinda, 55 in Sangrur and 52 in Faridkot,” said Surjit Singh, president of the Bhullar Bhaichara Committee. He said, “We have a system in place now and will issue directions at the last moment. On Bathinda seat, we have 1.85 lakh committed voters.”

He said, “We have been already opposing the campaign of Harsimrat Kaur Badal in villages. However, we have yet no take a decision which candidate should be supported in the coming elections. We will take the decision at the last moment.”

“Elections are a very important tool and we will use our electoral power to solve this issue. We want land belonging to our ancestors back. We will consider all parties including SAD and will vote for a candidate who will ensure us our land is restored,” said Surjit.

A PEEP INTO the CASE
The Bhullar community claims that Gurdwara Mari Sikhan Wala land belongs to their ancestors, while the SGPC claims that it belongs to sixth Guru of Sikhs and, hence, stakes its right over the land under the 1925 Gurdwara Act.

“A battle between the Bhullars and the Sidhu-Brar clan was fought in the 17th century in which Bhullars’ leader Jaidpurana, who was married to daughter of a Bhullar, was killed in the hands of Guru Hargobind Sahib,” said Maghar Singh, a leader of Bhullars. He said, “SGPC wrongly states that Guru Hargobind Singh stayed in Mari Sikhan Wala Gurdwara during that war. The fact is that the place is about 10 km from Rampura Phul at Mari Manna Wali village.”

“Our 12th century ancestral Baba Sidh Bhullar, one of his disciples and his dog are buried at the disputed land. Guru Hargobind never came here. Some leaders want to grab this land under the banner of the SGPC,” said Maghar Singh.

He said, “You can also find the weapon at the gurdwara at Mari Manna Wali with which Guru Hargobind killed Jaidpurana.”

SGPC additional secretary Kewal singh claimed that Guru Hargobind stayed at Mari Sikhan Wala village gurdwara and it came under SGPC in 1936 under the Gurdwara Act.