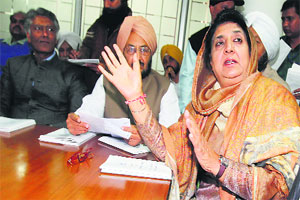 Bhattal told Hooda that the Sikhs in Haryana had suffered a lot during the 1984 Sikh genocide during which their homes, factories and other properties were destroyed.

Hundreds of Sikh families had lost men, women and children in the carnage. Many of them had to flee the state to save their lives, leaving behind their hearth and homes, she said.

Bhattal urged Hooda to give adequate compensation to the affected Sikhs so that they could start their lives and businesses afresh.

She told the Haryana CM that these aggrieved Sikh families had all proofs and relevant documents which made them eligible for government aid.

Hooda assured Bhattal that all possible help would be extended to the affected Sikh families.