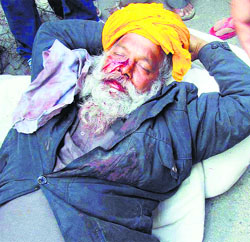 Amritsar, Punjab: A 1984 genocide victims’ body today accused former Jathedar Puran Singh and his sons of thrashing one of their members who was a resident of a colony owned by them. A land dispute was stated to be the reason behind the attack.

Kashmir Singh, 1984 Sikh genocide Victims Sangharsh Committee president, alleged that Harpal Singh was waylaid by the former Jathedar, his two sons and a gunman and beaten up. The victim sustained injuries on his face and had to be hospitalised.

Kashmir alleged that Puran Singh and his two sons, who came in a red beacon-fitted vehicle with temporary number, first hit Harpal’s motorcycle and then thrashed him. He alleged a number of women who along with other residents came to rescue Harpal were also manhandled. The police are yet to register a case.

Repeated attempts to contact the former Jathedar proved futile as his mobile phone was switched off.