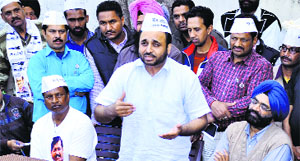 Bhagwant dares rivals to an open debate on issues

Sangrur, Punjab: Aam Aadmi Party (AAP) candidate from Sangrur Bhagwant Mann today dared sitting MP Vijay Inder Singla and SAD nominee Sukhdev Singh Dhindsa for a debate with him. Mann, who was in the town today, said both the leaders (Singla and Dhindsa) had been making tall claims of development in the constituency.

He said an open debate was a must so that people could know what these leaders had done for the common man.

He said he had not quit the People’s Party of Punjab rather the party deserted him as its supremo Manpreet Singh Badal had compromised with party’s principles to shake hands with the Congress.

He said he would contest the election under the leadership of Sangrur district convener of AAP, Dr AS Mann.

He urged the people to vote for “jhadu” which was a symbol of “cleanliness in politics”.

Mann said AAP would include environment in its agenda for which they would approach environmentalists like Balbir Singh Seechewal.

Mann also warned political parties against distribution of liquor and drugs during the elections saying AAP’s sting operation teams would keep a close watch on such activities.