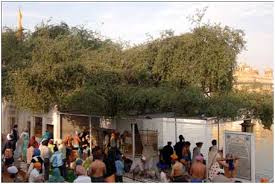 Amritsar, Punjab: An expert from Belgium, Sonian Hablox, today met the Shiromani Gurdwara Parbandhak Committee (SGPC) officials here and put forth her suggestions for upkeep of the ancient ‘ber’ trees in the Golden Temple Complex.

Sonian was accompanied by MD Group chairman Harpal Singh and MS Dhanju from BIS Group of Industries. Dhanju told the SGPC officials that Sonian’s firm in Belgium was involved in the upkeep of trees using organic methods and she also had a word with a noted scientist of her company regarding Dukhbhanjani Beri, a part of which has dried up.

He said the Belgium-based firm would be keen on cooperating with the SGPC in maintaining the ancient ‘ber’ trees. He said the company would treat these trees with the help of natural techniques and there would be no side-effects.

Dhanju said they would first carry out a study about the existing environment before starting their treatment on these trees. The SGPC officials subsequently felicitated the trio by presenting them ‘siropa’ and a picture of the Golden Temple. The Punjab Agriculture University (Ludhiana) is currently looking after the ‘ber’ trees at the shrine.

Previous: DSGMC hails relief to Bhullar
Next: After SC verdict, Bhullar’s family hopes for his return