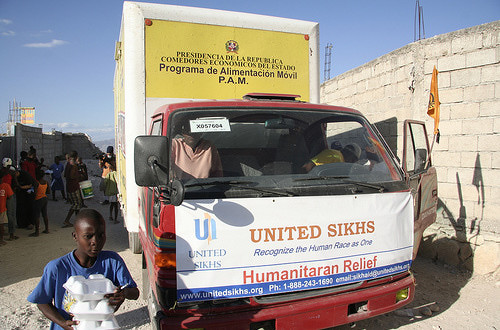 Comments Off on BBC study: Sikhs are most generous than other communities 1,300 Views

London, UK:  A recent BBC study has found that the Sikhs (followers of Sikhism) are the most generous people among other all religious people living in UK. The study based on giving charity to show a person generous, concluded that religion can make people more generous in their everyday lives. The study also suggests that the Sikh religion teaches its followers to be more generous than any other religion.

The study, carried out for the BBC’s network of local radio stations, included polling by ComRes of a sample of more than 3,000 people of all faiths and those who believe in none.
The study revealed that the Sikhs, originated from Punjab state of India, are on the top at the generosity table followed by Jews. Sikhs and Jews emerged as the most likely to share their worldly goods with a good cause.

Among those polled, all of the Sikhs and 82 per cent of practising Jews had given money in the past month as a charity. Among practising Christians the figure was 78 per cent.

It is pertinent to mention that the Sikh religion’s three major teachings “Kirat Karo, Naam Japo, Wand Chhako” (Do hard work to earn, Meditation on Naam, eat after sharing with needy and poor) include the sharing worldly goods with needy and poor while Sikh religion allows its followers to spend one-tenth of the earnings in welfare deeds.
As per the study reported by “The Telegraph”, people who profess a religious belief are significantly more likely to give to charity than non-believers.

It found that levels of generosity across the British public are strikingly high, but highest among those with a religious faith.

Overall as many as seven in 10 people in England said they had given money to a charity in the past month. But while just over two thirds of those who professed no religious faith claimed to have done so, among believers the figure rose to almost eight out of 10.

Previous: Sikh Temple mass shooting: Where have all the donations gone?
Next: HSGPC issue: SGPC carries on with anti-Cong rhetoric