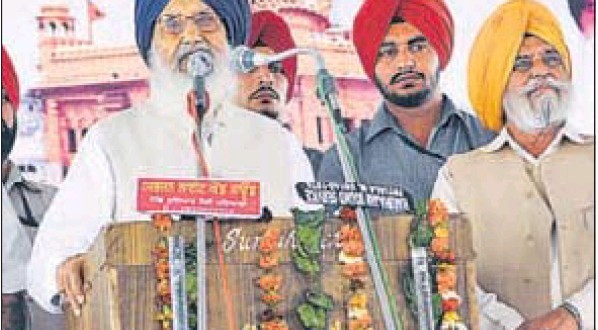 Patiala, Punjab: With Amritsar MP Navjot Singh Sidhu reluctant to campaign for SAD-BJP candidate Arun Jaitley from Amritsar, Punjab chief minister Parkash Singh Badal said on Tuesday that he personally wanted Sidhu to campaign for Jaitely. With these comments, Badal has put the issue to rest. Sidhu had stated that Badal didn’t wish that he should campaign in Amritsar.

“I urge Sidhu with folded hands hands and personally want him to campaign for Arun Jaitley from Amritsar”, Badal said on the sidelines of 10th death anniversary of “panth rattan” jathedar Gurcharan Singh Tohra at Tohra village in Patiala district.

Speaking on Sidhu’s comments regarding Badal’s hands in denying ticket to him from Amritsar for the fourth time, Badal indirectly said that it was BJP’s own decision not to give ticket to Sidhu and Akali Dal had nothing to do in it. “Neither SAD nor the BJP interferes in each other party matters, especially when it comes to distribution of ticket at their respective constituencies”, he said.

Mean while , attacking former chief minister Captain Amarinder Singh, contesting from the Amritsar seat, he said Amarinder had been giving unnecessary statements and should better analyze the failure and success of his tenure before saying anything.