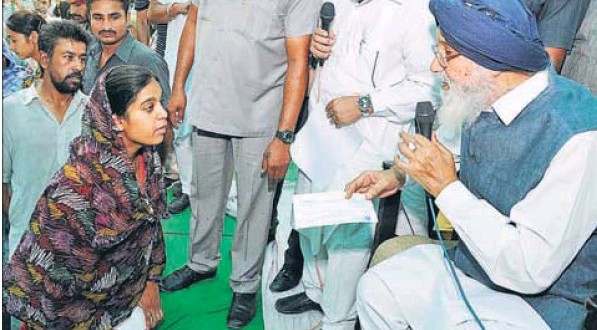 Talwandi Sabo, Punjab: Reacting to the recent statement by Haryana chief minister Bhupinder Singh Hooda that the state would have a separate gurdwara committee for Haryana, Punjab chief minister Parkash Singh Badal on Saturday said the Congress was playing with fire as Sikhs would not tolerate interference in their religious affairs.

He said the move to divide Sikhs was uncalled for and the Shiromani Akali Dal would vehemently oppose it. “We will not allow the Congress to meddle in our religious affairs and any such proposal would meet with a stiff resistance,” Badal said.

He said the Cong ress had always adopted an anti-Sikh stance and the recent move of its government in Haryana had shown that a leopard never changes its spots. Badal said the Haryana chief minister’s announcement was politically motivated in view of the forthcoming assembly polls in the state.

Talking to reporters at a sangat darshan programme in the Talwandi Sabo assembly se gment, the chief minister said the Shiromani Gurdwara Parbandhak Committee had come into being after numerous sacrifices made by Sikhs during the British rule.

Badal criticised for me r Punjab chief minister Capt Amarinder Singh for holding the SAD responsible for the violence at the Golden Temple on Friday, saying the Amritsar MP had always misled people by telling lies.

He said nobody would be allowed to disturb the hardearned peace in the state.