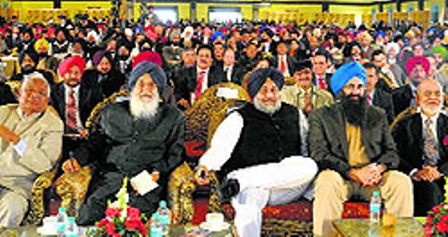 The event, he said, would provide a platform to the Punjabi community settled across the country to participate in the state’s progress.

Addressing a gathering on the second day of the NRI Sammelan at Bath Castle here, Badal said, “Such meetings provide an opportunity to Punjab-origin people to connect with their home state. Since Punjabis have been occupying important posts in various countries, there is need for greater partnership in sectors like education, trade, industry and agriculture.”

The CM emphasised on constituting joint committees comprising experts from Punjab and other countries, including Canada, US and Australia, in various sectors for implementing joint ventures. Badal assured the visitors that whatever had been discussed at the sammelan would be taken care of by NRI Department as well as his own office. He also said the sammelan should be extended from two to three days so that everyone was given a chance to express views.

Urging the NRIs to enroll their children in Punjab schools till Class II, he said the practice would ensure that the next generations of the NRIs remained associated with the rich cultural heritage of Punjab.

The holding of the event in Jalandhar is being construed as an attempt by the SAD-BJP government to woo the NRIs — the community has a considerable influence in Doaba — ahead of the Lok Sabha poll. Deputy CM Sukhbir Badal claimed that Punjab would witness drastic improvement over the next three years. “Once you all (NRIs) left Punjab for better avenues abroad. Soon, similar opportunities will be available in your home state. I appeal to you to explore all those opportunities,” he said.

NRI Affairs Minister Bikram Majithia claimed the government had fulfilled 90 per cent of its promises made to the NRIs.

Appreciating Sukhbir, Badal said, “I feel satisfied as a father when I see Sukhbir working to serve the people of Punjab with dedication.” Unlike last year’s NRI Sammelan when Badal had ticked off Majithia saying he had “got everything on a platter without making any sacrifice”, the CM said: “A majority of those sitting in the first row are Akalis who struggled and remained behind bars for the interests of Punjab. But, time has changed. ‘Hun ta Sukhbir-Majithia da raaj hai’ (It’s the turn of Sukhbir and Majithia to rule now)

Previous: Soon, platform for US Sikhs keen to invest in state
Next: Not heard, NRIs give thumbs down to sammelan