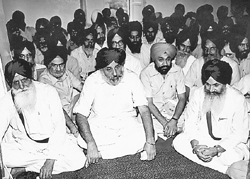 Comments Off on Badal, Longowal and Tohra asked GOI for military action 474 Views

In an open letter to Badal, Capt Amarinder reminded him that “on March 28, 1984 you had a meeting with PV Narsimha Rao, which was attended by the Cabinet Secretary, the Principal Secretary to the PM and the Union Home Secretary. This meeting was held in a guest house in New Delhi according to the white paper. I say the object of the meeting was to convey to him your concern at the situation in Darbar Sahib and ask the Centre to take military action”.

Asking Badal to come clean, he said, “you have been Chief Minister of this state five times, what prevents you from addressing a press conference to either refute or accept my accusations with supporting details”.