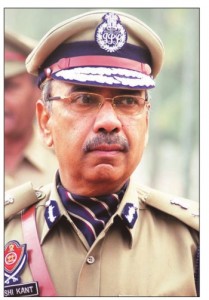 Khanna, Punjab: Former Director-General of Police (DGP), Prisons, Shashi Kant has reiterated the charge that the Punjab Government is patronising drug peddlers in the state. He warned the SAD that it would pay a heavy price in the coming Lok Sabha elections if it did not act against drug dealers in the state. He was speaking at a function here by the Nasha Virodhi Manch.

To a query, he said a programme called “Direct Action” would be launched from Khanna and a “people’s commission” comprising former or retired judges, advocates and other prominent persons set up to fight the drug menace.

“We will first gather information on key drug suppliers and then reveal their names. If the government fails to order a CBI inquiry against them, we will launch “Direct Action” from Khanna,” he warned. The former DGP alleged that the drug trade was being carried out right under the nose of the Deputy Chief Minister. He said two key issues confronting the state were drug sale and human rights violations. He alleged that top political leaders are minting money from the sale of drugs, ruining the lives of thousands of youths in the state.

He appealed to all right thinking people in the state to come forward and support their “Direct Action” programme. Kamikar Singh Mukandpur, Harpal Singh Cheema and former PPCC secretary Shashi Wardhan were among those present at the function.

2014-01-08
SSNews
Previous: SGPC team in Patna to probe group clash
Next: ‘Punjabi Heritage Month in Canada to be reality soon’