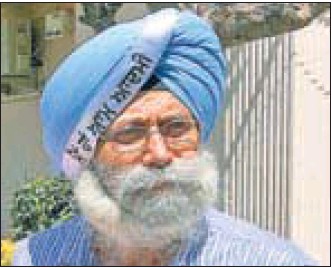 The home minister is empowered to constitute an SIT to reopen and reinvestigate the 237 cases that the police closed and never sent for trial but he is not empowered to order the monitoring of the SIT by the Supreme Court, Phoolka has stated. “It is surprising why Badal is trying to complicate the issue. It appears he is either not briefed properly or trying to befool the public,” he added in his statement issued here on Friday. He was losing candidate from the city in the latest Lok Sabha elections.

Phoolka, as trusted lawyer of the Shiromani Akali Dal (SAD) and Shiromani Gurdwara Prabandhak Committee (SGPC), represented the genocide victims in court on behalf of the SGPC but his equation with the Akalis changed after he joined t he AAP. His crusade for justice won him a lot of public support, and since he was now on the political scene of Punjab, the ruling Akali-BJP combine in the state didn’t like it. He lost the election to Ravneet Singh Bittu of the Congress, yet he is emerging as a powerful leader of the AAP in Punjab, continuing his battle against corruption and drugs, becoming as important as the four elected MPs of the party.

Asked if he would still offer guidance to the Punjab government in the riot cases, Phoolka said: “Political affiliation will not come in the way of justice for the 1984 genocide victims after I have spent half my life fighting for the cause. I take it as my duty, and the Badals are free to contact me on the issue.”

He said the BJP government was empowered to constitute the SIT with officers from outside Delhi Police, as the Arvind Kejriwal government of the AAP had in its short tenure in the Delhi assembly. “But demanding something not in the powers of the government amounts to delaying the whole issue,” observed Phoolka.