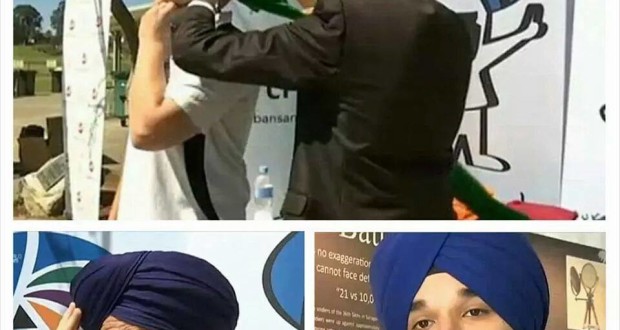 Australia: Sikhs have reported an increase in abuse in Australia from people mistaking them for hardline Muslims in the aftermath of the recent terror raids and the shooting of a known extremist.

Community leaders from around the country have reported rising tensions – and now Sikhs, who wear turbans and long beards, say they have been targeted.

Harjit Singh from the Australian Sikh Hertiage Association has experienced the rise of verbal abuse towards Sikhs and urges Australian’s to educate themselves on their heritage in Australia.

‘We walk down the street and sometimes we do get abused, being called a terrorist or go home Taliban, those things are just unfortunate,’ Mr Singh told SBS.

Mr Singh said Sikhs have been part of Australia’s culture for 150 years and insists that the nation should embrace multiculturalism at a time where fear is so easy to accept.

The increased panic comes as Australia’s terror alert level has been raised to ‘high’, citing the domestic threat posed by Islamic State supporters.

Earlier this month the nation experienced it’s largest counter-terror raids in Australia’s history, as police detained 16 people across Sydney and Brisbane and charged one with conspiring to behead a random person.

Since then, a terror suspect was shot dead after he stabbed two Australian counter-terrorism police officers.

Now Sikhs are facing the brunt of it, as Australian’s mistake the religious group for radical Muslims due to their traditional costume – a turban and beard.

This has prompted community members in Kellyville, north-west Sydney, to combat ignorance in communities by creating an initiative, the Super Sikh Cup, that will educate Australians and tackle fear against turban wearers.

On Sunday hundreds gathered on the field to compete for the Super Sikh Cup, which saw communities come together in an attempt to bridge cultural divides.

Despite this step taken to combat the issue, fear and discrimination against Sikhs are still embedded within communities in Australia.

Mr Singh works with Turbans and Trust, a group that uses the turban as a vehicle to discuss faith, religion and multiculturalism between different races.

Turban and Trust allows people to try on a turban and educate themselves on it’s history.

‘It’s simply a form of head covering respecting their religious observance, there are many such things around different traditions in the world and most of them present nothing whatsoever for people to be afraid of or worried about,’ Kevin Connelly, the Local Member for Riverstone in north-west Sydney said.

The turban has existed for thousands of years and around 500 years ago Sikh’s decided to incorporate the turban into their community as a sign of equality.