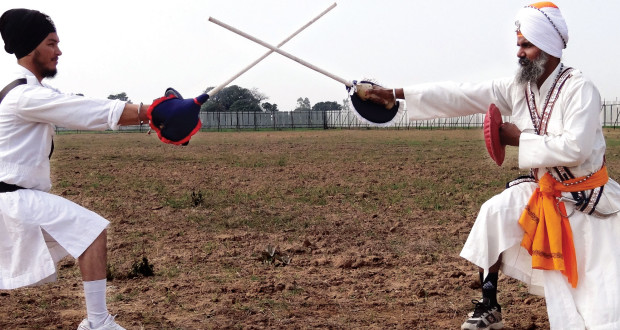 Asian Gatka Cup to be held in next February in Malaysia

Patiala, Punjab: With  a view to promote martial art Gatka at international level, Asian Gatka Federation (AGF) has decided to organise its first Asian Gatka cup in February next at Malaysia. This was announced by AGF president S.P. Singh Oberoi during the concluding ceremony of three day national gatka refresher course held at Punjabi University Patiala.

Addressing the gatka referees, coaches and technical officials in the university science auditorium Oberoi said that World Gatka Federation and Asian Gatka Federation has already constituted more than three dozen federations in different countries and organised national level gatka events in Nepal, UK, Canada, USA etc. He added that earlier it was decided to host Asian Gatka Cup at Dubai but due to some technical restraints this international event will be organised at Malaysia in the next February. “Dates for this event will be announced shortly after a meeting with Malaysian Gatka Federation”, he said.

Divulging details for the promotion of Gatka at national level, Gatka Federation of India President Harcharn Singh Bhullar said that the Federation has chalked out various activities and had organised 48 gatka training camps and 53 gatka tournaments at state and national level. He announced that second National Gatka Championship will be organised at Mastuana Sahib (Sangrur) in November this. He exhorted the gatka coaches to inculcate the fighting techniques among the budding players to fine tune the martial art skills.

On the occasion Chairman State Backward Classes Commission Kirpal Singh Badungar who is also former SGPC president advised the participants to update their martial techniques so that their students could excel at national and international events. He assured all help to the federation for the promotion of traditional martial art so that this ancient art could flourish at overseas and enter into Olympics.

Previous: STATEMENT BY THE LEADER OF THE OFFICIAL OPPOSITION, TOM MULCAIR, ON MELA GADRI BABIAN DA
Next: National Sikh Campaign To Hold Meeting of All Gurdwaras on August 16th