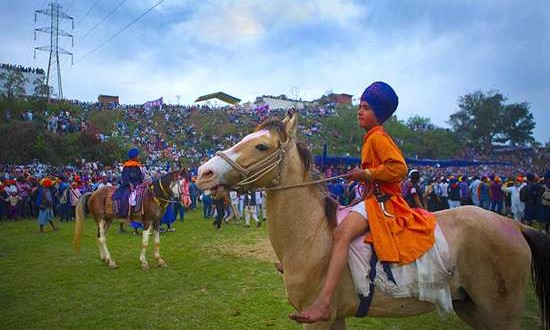 Arrow In The Blue

Comments Off on Arrow In The Blue 696 Views

Anandpur Sahib, Punjab: The little town in Roopnagar district of Punjab with the Sutlej a shimmering blue presence on its south-west border—is painted yellow-orange for Hola Mohalla, the spring festival of colours. The Nihangs (Sikh warrior-mendicants) with their distinctive electric-blue robes and quoits of steel tiered in their lofty turbans, are battle-ready. Mock fights with real weapons, swordplay (gatkas) and bareback horse-riding in simulated battles enliven the vibrant Sikh fiesta. Devotees in pangats (long queues) congregate at gurudwaras for rich and aromatic langars (crammed full with succulent jal­e­bis, wholesome paranthas and milky las­sis), while others are high on bhaang (crushed and taken as a liquid or baked into cookies) as well as ‘forbidden nectar’ at warrior camps. Hay-stacked tru­cks and tractors serve as homes, while camps-outs are comfort dens.

To underscore the tradition of horsemanship and bring an international flavour to the carnival, Sodhi Vikram Singh, the charismatic descendant of the fourth guru of the Sikhs, Guru Ram Das, has introduced a spectacular four-day arena polo tournament—to enthuse rural folk who have an inherent love for horses and dazzle visitors with the visual grandeur. The unassuming gro­unds of the Khalsa Senior Secondary School, dressed in its Sunday best in colourful banners and awnings, is the venue for the new event on the festival calendar. Eminent dignitaries and foreigners sporting chic apparel occupy the spruced-up bleachers, while curious onlookers watch from over the boundary walls. High tea and stilettos are a break from the traditional charpais and langars that serve the rest of town. The stage is admirably set for a royal sport. Here, the 25 magnificent stallions ship­ped all the way from Delhi (each costs over Rs 25 lakh) are the stars of the day till the nail-biting finish. Vikram, a polo player of international repute, who’s also one of the first civilians to field his own team, has been in the arena for 35 years. “The idea is to get more people interested in the sport and also in Anand­pur Sahib as an international tourist destination by focusing on its history, tradition and heritage, especially youngsters,” he says. It was here at Anandpur Sahib that Guru Gobind Singh inaugurated the Khalsa by choosing the ‘Panj Pyare’ (five beloved ones), hence launching the order of the saint-soldiers. The Nih­angs, who still live by the old warrior code, gather in thousands at the holy town during Hola Mohalla to display their repertoire of martial skills and orchestrated derring-do. At one of their meets, we cau­ght up with Har­preet Singh, a young American who converted to Sikhism eight years ago. Wearing a large chak­ram around his neck, iron bracelets aro­und his wrists and a turban fitted with a trident that can also be used as a wea­pon, he speaks to us in fluent Pun­j­abi. “I was born to be a Nihang. It was like an inner calling; I can’t even recall my life before this.” Soon after, he joins the procession that passes through baz­aars, goes to village Agampur and reac­hes the fort of Holgarh—where the fair was held in Guru Gobind Singh’s days. In the final hours, they con­verge on a huge mela ground, where the fair culminates in a superb display of horse-rid­ing, wrestling and sword-wielding, to the lusty applause of a rapturous crowd.