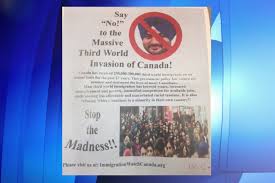 Brampton, Canada: A line on the flyer says, “Stop the Madness,” and asks Brampton residents to “say no to the massive third world invasion of Canada,” saying immigrants will reduce white Canadians to a minority. It also has the face of a Sikh man covered by a “prohibited” symbol.

This comes after another flyer was handed out in Brampton in April with pictures of Sikhs and the caption, “Is this what you really want?” It was printed by a group called Immigration Watch Canada, based in B.C.

The co-founder of the Vancouver-based group said he did not authorize the latest flyer.

He said that the group agrees with the overall message but said the picture may have gone too far.

“I don’t agree with them putting the picture of the Sikh in the circle,” Dan Murray said.

The current flyer has the organization’s logo printed at the bottom.

When asked if Murray thinks his group’s cause is racist, he said, “Our cause is pro-Canadian.”

The flyer says immigration is to blame for lowered wages, increased poverty and unemployment, and reducing whites to a minority in their own country.

“As a politician … this is a serious issue. Today [it’s] one community; tomorrow [it’s] going to be in another,” Jagmeet Singh, the MPP of Bramalea-Gore-Malton, said.


The Crown attorney’s office will take a look, but like the April flyer, it’s not expected this will be treated as a hate crime.

Peel police wouldn’t comment on-camera, but said the first flyer did not warrant charges. Legal experts said it’s up to the Crown to decide if this new poster constitutes hate.

“It requires a willful promotion of hatred toward an individual group or class of persons. And in these flyers … it doesn’t say, for example, ‘You must hate all Sikhs’ or ‘They shouldn’t be allowed in the country,’ or things of that nature,” Gary Batasar, a criminal lawyer, said.

The Ontario Sikh & Gurudwara Council said it will be discussing what action it can take at its next meeting — and will call on politicians to help.

“It is it is sad this racist flyer is trying to create tension in Brampton,” chair Ranjit Dulay said. “But it does not reflect the city of Brampton and its residents.”

“I consider myself Canadian first so when I see a message like this, I think it delivers the wrong message across the world,” Satinderpal Kahlon, a Sikh-Canadian, said.

Even though Immigration Watch Canada said it was not responsible for the latest flyer, it has other pamphlets it said will be distributed across the province shortly.