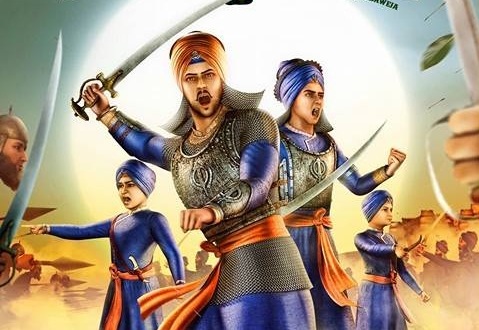 Chandigarh, India: The first animation film on the life of Chaar Sahibzadas produced and directed by Harry Baweja will be released world over on the birth anniversary of Guru Nanak Dev tomorrow. It has been produced in Hindi and Punjabi and dubbed in American English. The film is about the four sons of Guru Gobind Singh.

“It took me five years to make this film,” said Harry Baweja talking to The Tribune on the phone today. He said he spent two years doing research on the subject and then discussed it at length with the SGPC authorities. “I was able to convince the SGPC that time has come to present the Sikh history in visual medium as it has become a way of life for the new generation,” he said. “SGPC’s Dharam Parchar Committee gave valuable inputs to me to make it a perfect film,” he added.

“While making the movie, I visited Amritsar and met the SGPC authorities concerned to discuss various scenes and incorporate suggestions made by them about the historical events,” he said.

While conducting a research on the subject, he came across many facts that were not in public domain, he said. “I have included all these facts in my film with length slightly over two hours,” he said. For instance, no one knows how two elder Sahibzadas spent their early childhood, how they got training of warfare and how two younger ones attained such a high determination at such a young age.

“All four Sahibzadas were true heroes and I was keen that the entire world should know it. In due course, the film will be released in China and Japan also,” he said. “I faced so many challenges while making the film. There are religious restrictions. We could not show moving images of Gurus. These were to be shown in static form. No one is allowed to play the character of Gurus in any form,” he said. “To overcome this challenge, we had to be innovative,” he said.

Previous: US Sikhs hold nagar kirtan in Yuba City
Next: Phoolka seeks relief for kin of soldiers killed in 1984 genocide