Amritsar, Punjab: Sree Guru Ram Das Jee International Airport has virtual turned into a relief camp with as many as 1,500 people evacuating from floodhit Srinagar landing at the Holy City since late Saturday night.

The Punjab government and the airport authorities have made elaborate arrangements at the airport to provide immediate relief to the flood victims.

Immediately after landing on Sunday, hundreds of residents from various districts of Punjab, Bihar, Uttar Pradesh and Jammu rushed to a restaurant inside the airport. They were also provided food prepared by the Shiromani Gurdwara Parbandhak Committee (SGPC).

Arrangements have also been made for free STD calling, medical aid and ambulances at the airport. Besides, the administration has arranged buses to commute passengers from airport to railway station and bus stand.

Arun Kumar, a UP resident, who was stuck in the flood with his family, said, “The scenes in the Kashmir Valley were devastating and we are thankful to the army and air force personnel that many of us are alive. We are also thankful for the food arranged at the airport, as we are hungry for days.”

Though rescued people have many shocking stories to tell, kids who reached Amritsar seemed to be tormented by the turn of the event, as they are awestruck and shocked.

Deputy commissioner Ravi Bhagat along with airport director Sunil Dutt and air force officials monitored the entire arrangements made at the airport.

Talking to Hindustan Times, Bhagat said, “Efforts are being made to provide maximum relief to all evacuated people from Srinagar. Apart from food, transport and phone call facilities are also being provided at the airport. Several guest houses have been arranged for those who want to stay here. All arrangements will be at the place till the people keep coming here from flood-hit Jammu and Kashmir.”

400 TONNES OF RICE TO BE SENT TO J&K
As a relief measure, the Centre will be sending 400 tonne of rice to flood hit Kashmir. An airport official claimed that the entire consignment will be lifted from the cargo terminal of the city airport and it would take three to four days to send the entire consignment. Air force planes ferrying passengers from the Valley are taking rice bags back to the Valley and by Sunday, 60 tonne of rice had been dispatched to Srinagar.

SGPC BRINGS HOME 32 PEOPLE
The SGPC on Sunday brought home 32 passengers from Srinagar. The SGPC has brought back 109 people. It is also paying for their air tickets. It has sent ‘langris’ (cooks) and rations, besides other relief material. 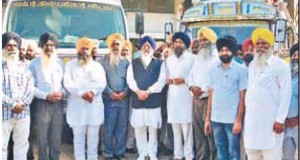 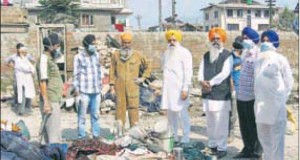