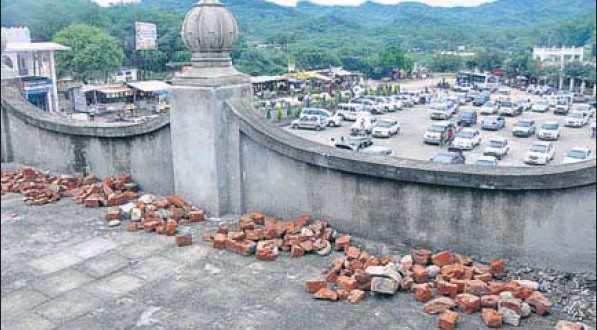 Comments Off on Amid takeover rumour, tension grips air at Nada Sahib 566 Views

Chandigarh: Despite the Supreme Court directive to maintain status quo in respect of all the 52 gurdwaras in Haryana, the situation remained tense at Nada Sahib gurdwara, Panchkula, on Thursday. The Supreme Court also directed the state government to take all steps to maintain law and order.

It was only by the evening that the situation eased a little.

Earlier in the day, the SGPC supporters claimed that they had received threats from Haryana Sikh

As many as 35 SGPC members and over 250 Sikh jathedars have been camping at the gurdwara. A call was also given to Sikhs to reach the gurdwara to avert the takeover.

Speaking to HT Rajawinder Singh (Raja Ladeh), general council member the SGPC, said, “The Akal Takht is supreme and there is an attempt to take control of the shrine forcibly, we are all ready to fight and shed blood.”

There could be seen at least three trolley-loads of stones stashed on the front and the back terraces of the shrine. The members in hushed tones said that at least 100 armed sikh workers were inside the gurdwara and intruders would be pelted with stones.

The SGPC members said they would be forced to fight the intruders as the local police and administration, despite requests, had failed to provide them protection. Gurdwara manager Mukhtar Singh said, “We have already requested the police to provide us protection but nothing had been done so far. We have been forced to protect ourselves on our own and we shall do whatever it takes to protect the gurdwara from intruders.”


Sources in the Panchkula police said that at least 100 Sikh workers had left the shrine late evening on Thursday, while at least 200 workers, excluding the SGPC members, were still inside.

Meanwhile, those from within the gurdwara said they had been taking turns to guard the entrance of the shrine at night.

MISSING DEVOTEES
Only a handful of devotees paid obeisance at the gurdwara on Thursday. Shopowners informed HT that the situation was the same for past at least three days. Also the management at the shrine said the footfall of pilgrims had decreased by over 80% in the past couple of days.