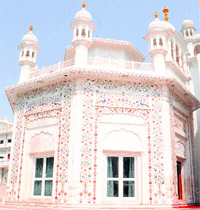 Amritsar, Punjab: An “Akhand Path” was started at Akal Takht today to mark the 30th anniversary of Operation Bluestar. The Damdami Taksal will organise a separate programme at its headquarters in Chowk Mehta to mark the occasion.

The All-India Sikh Students Federation has demanded that June 6 should be declared a state holiday to “honour martyrdom of innocent Sikhs”.

Even 30 years after Operation Bluestar, the SGPC is still struggling to get compensation from the Union Government for the damages caused during the Army operation as also to bring back the treasure trove taken away from the Sikh Reference Library.

The SGPC is contesting a case against the Union Government in the Delhi High Court seeking Rs 1,000 crore for damages caused during the Army operation.

SGPC chief Avtar Singh Makkar said they deposited the court fee of Rs 10 crore in the case last year, following which the court had issued notices to the Centre and the state government.

While the Centre has filed a reply in the court, the state government is yet to do so. The next hearing in the case is scheduled for August.

The SGPC had first filed the case in an Amritsar court in 1985, but it was later transferred to the Delhi HC. Initially, the SGPC was averse to depositing the hefty amount of Rs 10 crore as court fee, intimating the Delhi High Court in March last year that it was withdrawing the case.

The SGPC move created a furor in Sikh circles, so it went back on its decision and submitted a plea in the court in April, expressing its intent to carry on the legal battle.

Geelani vows support to Sikh ‘struggle’
Srinagar: Kashmiri separatist leader Syed Ali Geelani on Wednesday expressed sympathy for the families of those killed during Operation Bluestar and 1984 genocide. He wrote to Kanwar Pal Singh, Dal Khalsa chief, that the Kashmiris would “always support the Sikhs in their fight for honour and dignity”.