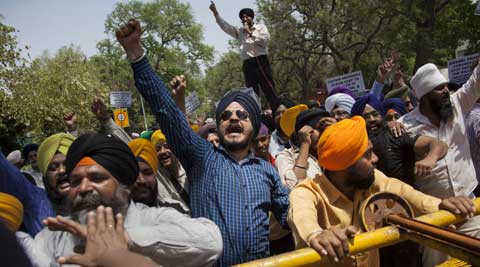 Capt Amarinder Singh, Congress candidate from Amritsar Lok Sabha constituency, told a television news channel in an interview that Tytler’s name in the 1984 genocide came up only when he was fighting Madan Lal Khurana in Delhi’s poll.

“We will meet the Election Commission and complain about Amarinder Singh’s remark. We are protesting here because the Congress was responsible for the 1984 genocide. Sonia and Rahul (Gandhi) are responsible for giving Amarinder ticket from Amritsar and now he has given clean chit to Jagdish Tytler,” said Manjit Singh G.K., president, Shiromani Akali Dal, Delhi.

The police used water cannons when the demonstrators refused to move away despite repeated announcements for them to disperse. About 70 protestors were detained and taken to Tughlaq Road police station.

“Today, Amarinder has chosen to stand by those who tortured and killed innocent Sikhs,” Badal said during a TV interview.

Meanwhile, Amarinder in a separate statement issued at Amritsar, criticised the Chief Minister for “misinterpreting” his statement about Tytler vis-à-vis the 1984 Sikh genocide.

“I have neither given any clean chit to anyone nor do I like to blame someone just because Badal blames him,” the Congress leader said.

Amarinder also said that no court has so far held Tytler guilty. “I have only stated what I heard during my visit to the riot hit areas and after meeting people there (in 1984).”

“Just because people like Badal will get annoyed with my speaking the truth does not make me shy from doing so,” the former Punjab Chief Minister said.

Previous: SAD to reopen ’84 genocide cases
Next: Badal did little for genocide-hit: Sarna