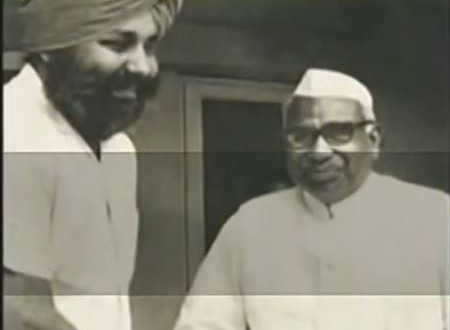 Chandigarh, Punjab: Secret Akali-Centre meetings before Bluestar included Sector 2 house in Chandigarh, claims former Deputy Commissioner Raghbir Singh. “I received a call from Chief Commissioner Krishna Banerji asking me to see him immediately. As soon as I entered his room, he signalled all those already present there to leave immediately. He told me to make preparations for a top-secret meeting between some top politicians from the Centre and Akali leaders lodged in the Burail jail. I was asked not to involve anyone in the mission, and keep the police out of the loop.”

“I discussed various possibilities with Sub-Divisional Magistrate TC Gupta. He managed to procure keys of a private house in Sector 2, Chandigarh, for use as the venue of the talks on March 27, 1984.” Three rounds of talks had already taken place between the Akalis and the Union Government in Delhi and the fourth one was to be held in Chandigarh, recalls the then city Deputy Commissioner Raghbir Singh.

Since it was a top-secret mission, it was decided to use a car without a flag and replace the original number plates with fake ones. “I myself drove the car to the Burail jail. As I was also the IG (Prisons) for Chandigarh, being the District Magistrate, I knew the Jail

Superintendent RD Sharma was a smart cookie. I sent him to Ludhiana on a purchase assignment. I opened the gate and huddled the Akalis into the car and ferried them to the venue of the meeting,” he recalls. The meeting was held between senior Akali leaders and the Home Minister PV Narasimha Rao-led Central team. Most Akali leaders were mortally scared of Jarnail Singh Bhindranwale, who had become very powerful, thus depriving Akalis of their political clout.

The Akalis wanted Bhindranwale neutralised, but till then they had no inclination about the plans of the Centre (about Operation Bluestar). After holding talks at a private residence in Sector 2, Chandigarh, on March 27 and 29, 1984, another meeting took place at the Chandigarh Airport on April 21, 1984. However, no solution could be worked out.

Subsequently, the venue of the meetings shifted to Delhi and the eighth and the final meeting took place in a guest house in Delhi on May 26, 1984, just days before Operation Bluestar.

Raghbir Singh said he received all orders from then Chandigarh’s Chief Commissioner Krishna Banerji. He believes the meetings were aimed at finding a solution to the Punjab tangle. “The homework done during those meetings later took the shape of the Rajiv-Longowal Accord,” he says.

Giving specifics to suggest that the Army action was not discussed with Akalis, he says during an overnight stay in Sector 5 here, Indira Gandhi told senior leaders, “You all want a solution, but none of you tells me what can be done to neutralise Bhindranwale.”

According to Raghbir Singh, Abinash Singh, the then secretary of Harchand Singh Longowal (who was later gunned down, as was Longowal) was the emissary between the Akalis and the Centre.

2014-02-13
SSNews
Previous: The Story of the Sikligars
Next: Continue to Deny Narendra Modi a Visa to the United States – Petition