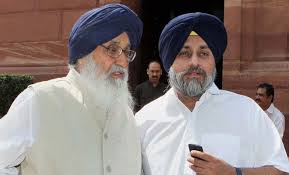 Akali Dal-BJP alliance will drown in the river of drugs: Punjab Congress

Comments Off on Akali Dal-BJP alliance will drown in the river of drugs: Punjab Congress 570 Views

Chandigarh: The Punjab Congress said the Akali Dal-BJP alliance in the state would drown in the sixth river of drugs and liquor flowing in the state whose source was this very alliance. The people were filled up with anger as by patronizing smuggling of narcotics, the Akali Dal leaders were playing with the future of this sensitive border state.

In a statement issued here today, party general secretary and member of its state level campaign committee Rajanbir Singh said the menace of drugs had taken over Punjab like an epidemic and the situation worsens during elections. He slammed the Akali Dal for distributing drugs and other narcotics during elections along with money to buy votes. He said nothing could be more unfortunate than the fact that the Akali Dal had been resorting to such shady means even in the elections to the Shiromani Gurdwara Parbandhak Committee.

Rajanbir said Chief Minister Parkash Singh Badal had been misleading the people by saying that smuggling was taking place from across the border due to the laxity of the security forces posted on the border and as such, it was the government at the centre was responsible for it. However, the arrest of former cop Jagdish Bhola and the disclosures made by him had revealed that the drugs consumed in this state were being manufactured here and this Rs. 5000 crore racket had the patronage of a powerful minister.

He said this latent anger in the people would burst out during the elections and the countdown of the Badal government would start from May 17 when the results would be out. He said the people were fully determined to show its proper place to the ruling alliance.

“The results would give a big shock to the self-proclaimed election management expert and Deputy Chief Minister Sukhbir Singh Badal as all his calculations have been upset with the Congress high command fielding senior party leaders. He said in several of such seats, the contest has virtually turned one sided”, he added.

He said the people in the state could never have imagines that sand would sell at the price of cement in this state. It was a free natural resource which the ruling alliance had monopolized and the sand mafia was charging goonda tax on sand. No action had been taken against these anti-social elements as the ruling party leaders were directly involved in this business. The sand quarries had turned into gold mines for these ruling party leaders, he added.