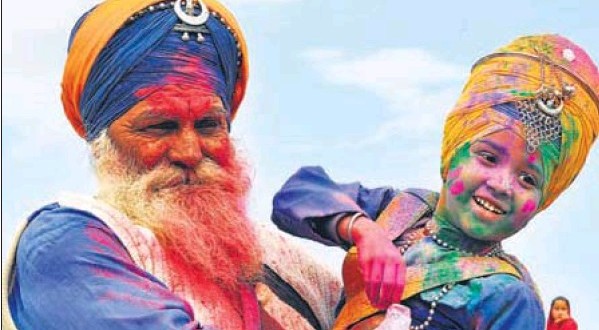 The message was delivered on Monday at Takht Kesgarh Sahib in Anandpur Sahib on the conclusion of the annual Hola Mohalla festival. The jathedar expressed serious concern over the “decreasing population of Sikhs and its affecting the progress of the community”.

He called upon Sikhs to solemnise the marriages in the early hours (Amrit Vela) of the day and say no to dowry, female foeticide, and ostentatious weddings. He motivated them to plant trees for a clean environment.

The Hola Mohalla celebrations concluded with the religious processions (mohalla) of the Shiromani Gurdwara Parbandhak Committee (SGPC) and Nihangs. The SGPC procession started from Takht Kesgarh Sahib and passed through the town’s main streets and Gurdwara Heeto Ji before culminating at the point of origin.

Takht Kesgarh Sahib jathedar Giani Mal Singh, besides Nihang from the Budha Dal and the Taruna Dal, also participated in the procession. SGPC president Avtar Singh Makkar was present at the start.

The Nihangs were in traditional battle gear, many riding horses, as they sprayed gulal (colour) on each other and displayed martial art skills such as “gatka” all through the procession. At displayed Charan Ganga Stadium, they demonstrated their tent-pegging skills.

Previous: Sikh kids in US target of hate: Survey
Next: Life shaped by genocide, he is seen as a crusader for humanity