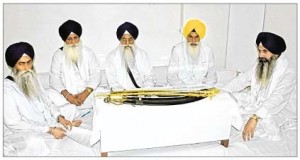 Amritsar, Punjab: The Akal Takht has found a Bengaluru-based Sikh and member of a gurdwara management committee, Harminder Singh, guilty of desecrating a gurdwara and declared him ‘tankhaiya’ ( guilty of religious misconduct).

“He was found indulging in immoral acts inside the premises of the gurdwara and he did not desist in spite of our written warnings,” said Akal Takht jathedar, Giani Gurchachan Singh while addressing the media after chairing a meeting of the Sikh high priests on Sunday.

The ‘guilty’ Sikh has been directed to appear before the Akal Takht during the next meeting of the high priests. The date will be intimated to him.

“If he appears we will award him ‘tankha’ (religious punishment) but if he fails, we will proceed in accordance with our traditions,” the jathedar added.

Harminder Singh is a member of the mana g e ment o f the shrine, which he has been accused of misusing.

He also brings out a monthly magazine, ‘Khalsa Bulletin’.

The clergy at its meeting also took note of cer tain derogatory remarks that were passed against the Akal Takht jathedar by Gurcharan Singh Babbar, a Delhi-based Sikh, who runs an organisation called the ‘All India Sikh Conference’. Babbar had in a recent article in a Punjabi magazine, criticised the functioning of the jathedar. He too has been asked to appear before the Akal Takht at the next meeting of the high priests.