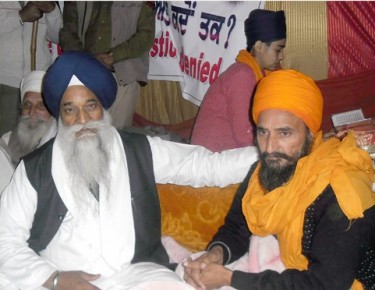 Comments Off on Akal Takht chief must keep his word: Khalsa 397 Views

The Sikh activist invited suggestions from the Sikh Sangat as to what he should do if the promise made to him was broken. While Gurmeet Singh returned to the Burail Jail today, two more will be back in prison on Saturday when their parole period ends. He claimed that a detainee in a Karnataka jail was being shifted to a Punjab prison.

Lakhwinder Singh paid obeisance at the Golden Temple today before returning to the Burail Jail. He chose not to speak much to the media. Lakhwinder Singh, Shamsher Singh and Gurmeet Singh, convicted in the Beant Singh assassination case, were freed on parole last month. Lal Singh, another Sikh detainee, was released on parole in December last .

Previous: Gurmeet back in Burail Jail
Next: Faith factor: US military eases regulations on turbans, beards