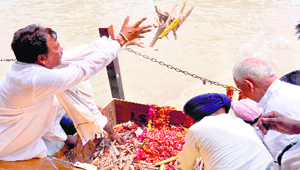 Comments Off on Ajnala martyrs’ remains immersed in Ganga 623 Views

Haridwar, India: The mortal remains of martyrs of the 1857 uprising, which were recovered from a historic well in Ajnala, were immersed in the Ganga here today. Surendra Kochar, a historian, said a total of 282 Indian sepoys who had revolted against the British rule in 1857 were shot in Ajnala. Their bodies were dumped in a well, which was later covered with mud.


Their remains were found during a recent excavation at the site. A number of medals, coins and badges of the soldiers were also excavated. Kochar said the exaction was well supported by local people of Ajnala who did not even hesitate to remove portions of a gurdwara constructed at the site 42 years ago.

Brought by Gurudwara Shaheedganj Shaheedanwala Khoon Committee members, the remains were immersed at the Ganga ghat of Sati Kund in Kankhal.

A large number of people gathered to witness the historic moment. A state CPI-ML leader urged the Union Government to set up a memorial at the historical site in Ajnala.