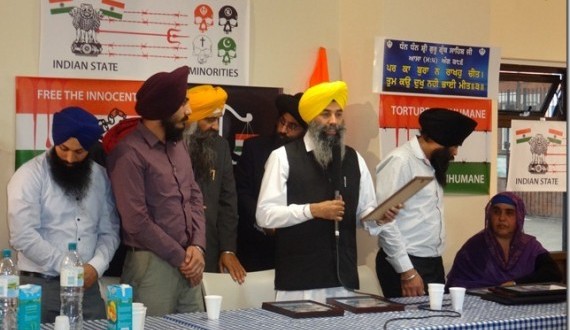 Comments Off on AISSF celebrates anniversary in Derby, opposes interlinking of rivers 583 Views

Moga, Punjab: Reiterating its demand for a Sikh homeland, the All-India Sikh Students Federation (AISSF) has called upon the Indian Government to stop the “ illegal” appropriation of Punjab’s water resources and free Sikh prisoners languishing in jails for the past many years.

At its 70th anniversary celebrations at Guru Arjun Dev Gurdwara in Derby, UK, on Saturday, the federation asked the United Nations to set up tribunals for crimes committed against the Sikhs in 1984. A resolution in this regard was passed under the leadership of AISSF president Karnail Singh Peer Mohammad. Talking to The Tribune on the phone, he said: “We congratulate the Scots for securing a referendum on the issue of independence… We desire to achieve freedom by peaceful and democratic means in accordance with international laws and the provisions in the Indian Constitution.”

Describing UK’s help to the Indian government for planning Operation Bluestar as shameful, he said now it should campaign for a referendum in Punjab.

In another resolution, the AISSF said: “We will support those who work towards good governance.”

Previous: After food, SGPC to send medicines for flood-hit
Next: Amritsar airport turns into virtual relief camp for those affected by floods in J&K