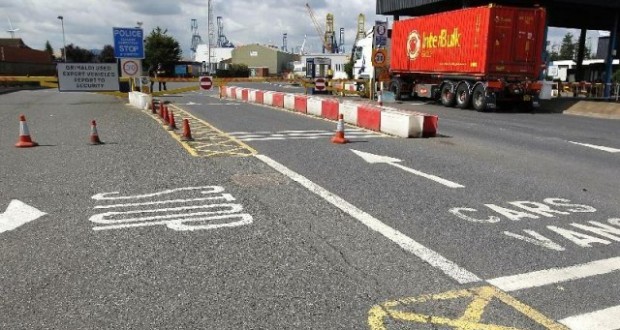 London, UK: The Sikh families found in a shipping container in Britain were fleeing persecution in Afghanistan and had been trapped in darkness without fresh air for 18 hours, their translator said Monday. The group, discovered at Tilbury Docks, east of London, feared they would have all died had they remained inside for a further 20 minutes, said Kamaljit Singh Mataharu, a Punjabi-speaking local man called in by the police to translate. One 40-year-old man did die and his children, aged nine and 12, were in the container with him, said Mataharu. Thirty-four people, all suffering severe dehydration and hypothermia, had been found alive on Saturday after they were heard banging and screaming. The container had crossed the North Sea on a ferry from Zeebrugge in Belgium. “It was pitch black, without any air. It soon became extremely uncomfortable,” Mataharu told ITV television. “Horrendous, horrendous, horrendous. They suffered a lot.”He said there were 15 families inside, all from Kabul, who had made it to Europe in a truck. The survivors were nine men and eight women aged between 18 and 72, and 13 children aged between one and 12.

“They were in a bad state. According to a little boy theyd been in the container for roughly 18 hours,” said Mataharu. The container had arrived on a truck at Zeebrugge 12 hours before the people inside were discovered at Tilbury. “Theyd been banging on the container. . . theyd tried for hours and hours for somebody to hear their voices,” Mataharu said. “They are thanking God they are alive. Another 20 minutes… all would ve been dead in there.” Footage obtained by ITV from shortly after the container was opened showed survivors sitting on the ground outside, and the sound of wailing could be heard. All 34 survivors are in the process of claiming asylum in Britain, according to the Home Office interior ministry. “This tragic incident is a reminder of the devastating human consequences of illegal migration and we will do all we can to help bring those responsible to justice,” a spokesperson said. “We are providing accommodation and support to those who require it while their (asylum) cases are considered.” A homicide investigation has been opened into the one mans death – none of the survivors are under suspicion – but police said Monday that a post-mortem on his body had proved inconclusive. “The family have been released. The deceased had a brother here and the children knew the phone number so we managed to get in touch with him and get him to the docks,” Mataharu said.

“The little boy said to me he tried to wake his dad and then they found out he was dead. “I had tears in my eyes. Looking at those kids and how desperate they would ve been to put their lives in that state. Imagine what conditions they must be living in Afghanistan. “What made them come here?” Mataharu said the migrants told him they were fleeing persecution in Kabul. The women said they could not go out due to harassment, while the men said Afghan locals would pull off their turbans. “They said they d rather die than live a life like that. They d rather be dead,” he said. The chair of the Sikh Federation UK said the case showed the plight of followers of the religion in Afghanistan had been overlooked. “It is a disgrace the persecution of the tiny minority of Sikhs from Afghanistan has largely been ignored and it takes an incident like this to remind us all that they are also being exploited by human traffickers,” Bhai Amrik Singh said. Detectives have finished interviewing survivors, who are now in the care of officials from the Home Office. Two adults and two children remain in a local hospital but were expected to leave later Monday. “These people were found in an awful situation and our main priority is to look after them and ensure they are now safe following what would have been a horrendous ordeal,” said superintendent Trevor Roe of the local Essex Police force. The local Sikh community has been helping look after the survivors, bringing them clothes and soft toys for the children.