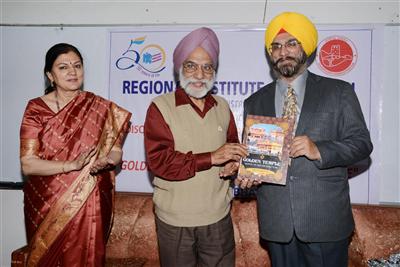 Chandigarh: Two books titled ‘ Golden Temple- A Marvel of Architecture ‘ and ‘ Words’, authored by celebrated visionary, architect academician, poet and author SS Bhatti were released at the Regional Institute of English by its director Dr Sharda Kausik here on Friday.

The for mer Gover nment Chandigarh College of Architecture principal holds a triple-doctorate and has many publications to his credit.

Bhatti said that the title of his book ‘Golden Temple…’ suggests a comprehensiveness that is crucial to an objective understanding of the subject, which he claimed has been so far ignored. “Through my illustrated analysis and cogent arguments based on the ‘comparative method’, I have established that a style of architecture, legitimately called ‘Sikh Architecture’ exists. I have also invented a method that may well be applied to verify the authenticity and autonomy of other styles of architecture like Hindu, Buddhist and Jain Architecture, beyond mere scholarly sentimentalism.”

He added that his studies were based on a study of 45 centuries of world architecture beginning with the Egyptian style.

The second book, also unusual, gives a fascinating picture of the English language from an architect’s point of view.

The author’s approach to understanding the language, which he calls ‘de-acronymisation’, will take one beyond the literal and the limited dictionary meaning of “a body of words and the systems for their use common to a people of the same community or nation, the same geographical area, or the same cultural tradition” to something more striking and universal.

The book talks of encompasses life in its full splendour and actively involving basic faculties like emotion and reason in their never-ending struggle to capture human aspirations as extensions of the instinct for gregariousness.

Book states that the urge to communicate with fellow beings is an irrepressible basic human need, next only to the requirements of food, clothing, and shelter.

The book states that it is this urge that has produced languagethe most beautiful artefact of human creativity-without which no advancement or development of any kind whatsoever would have been possible to distinguish humans from other forms of life.