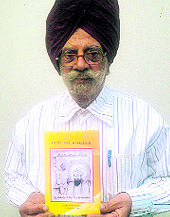 Amritsar, Punjab: A book based on the life and history of Guru Teg Bahadur written by academician Jagjit Singh Nagpal was released today at Prabhakar School, Cherherta. The book titled ‘Guru Teg Bahadur- Matchless Martyr of Faith’ records the life and the sacrifices made by the ninth Sikh guru.

The book attempts to retell some of the historical discrepancies about Guru Teg Bahadur, claims Nagpal. “I got intrigued to know more about the ninth Sikh guru as I read different accounts of his life in various books. No two books say the same thing and that’s when I decided to do more research on the subject,” said Nagpal during the book launch ceremony.

“There are varied accounts related to some notable events of his life and his execution. Some manuscripts from the Mughal era say that he was a dacoit, who wreaked havoc along with a Persian man Hafiz Adam. But, I discovered that Adam was a Persian student and died in 1670, five years before Guru ji was executed. There are several other misinterpretations and distorted stories that my book tries to explain,” he said.

Previous: Takht : Efforts on for release of Sikh detainees
Next: ‘Sikhs are duty-bound to ensure decrees not violated’