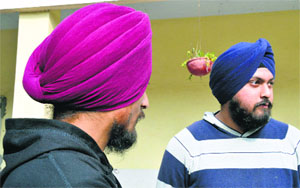 A turban tale: For faith and fashion

Ludhiana, Punjab: Turbans in endless hues and colours, tied in different styles, not only reflect the love for and prestige in one’s faith, but are also a fashion statement.

Over the past couple of decades, young Punjabis have been wearing turbans in different styles; the one called Patiala Shahi is the “in-thing” these days.

“The Patiala Shahi style of wearing turban has become very popular among the Sikh youth these days,” says Charandeep Singh, a student.

“Unlike other styles, this turban looks as elegant from the rear as it does from the front,” he says.

“It is worn with a slight slant that makes it interesting and fashionable,” says another youngster.

A few years back, the style of wearing turban as tied by singer Inderjeet Singh Nikku became very popular.

“Nikku’s style became very popular, and it seemed his turban had a bigger fan following than his singing. Most of the outlets selling turbans used to have his pictures hanging on their walls,” says Harneet, a resident.

Like other passing fads, Nikku’s style has now been replaced by Patiala Shahi.

“The Patiala Shahi style first came into vogue after Captain Amarinder Singh became the Chief Minister. Over the years, the style has improved,” says another student.