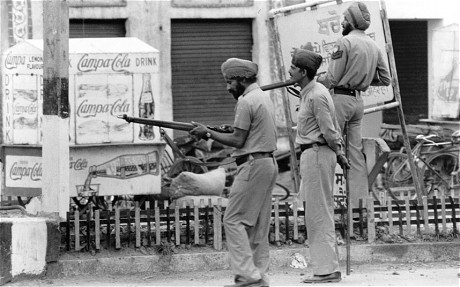 London, UK: The UK authorities collaborated with the Indian Government in planning Operation Bluestar — the controversial 1984 Golden Temple operation authorised by the then Prime Minister Indira Gandhi. This has been revealed by some newly released documents in London.

Secret correspondence from the British national archives shows how a UK special forces expert visited New Delhi and advised the Indian authorities on how to retake the Golden Temple, despite acknowledging that any military action could “exacerbate the communal violence in the Punjab.”

The name of the Special Air Service (SAS) officer and details of his hush-hush visit have not been made public, but a top secret letter written on February 23, 1984 by BJP Fall , Principal Private Secretary to the British Foreign Secretary, states, “The Indian authorities recently sought British advice over a plan to remove Sikh extremists from the Golden Temple in Amritsar. The Foreign Office decided to respond favourably to the Indian request and, with the Prime Minister’s agreement, an SAD (SAS) officer has visited India and drawn up a plan which has been approved by Mrs Gandhi. The Foreign Secretary believes that the Indian Government may put the plan into operation shortly.”

Fall’s letter to his opposite number in the British Home Office was written at a time when the UK was negotiating arms sales with India. His letter continues, “An operation by the Indian authorities at the Golden Temple could, in the first instance, exacerbate the communal tension in the Punjab. It might also, therefore, increase tension in the Indian community here, particularly if knowledge of the SAS involvement were to become public. We have impressed upon the Indians the need for security; and knowledge of the SAS officer’s visit and of his plan has been tightly held both in India and in London.”

Butler’s letter continues, “The Prime Minister is content that the Foreign Secretary should proceed as he proposes. She will look forward to receiving a report on the adviser’s visit and notes that the Home secretary would be informed if the Indians seemed likely to proceed with their plans.”

Commenting on the documents Opposition Labour MP Tom Watson says, “The claim that the British Government colluded with the Government of India over Operation Bluestar will cause huge upset and offence to many British Sikhs.

“I’ve only seen the documents this morning and am told there are others that have been withheld.

This is not good enough. It is not unreasonable to ask for an explanation about the extent of British military collusion with the government of Indira Gandhi.

“In the year when Sikhs commemorate their role in the centenary of World War-I and mourn for loved ones lost in the events of 1984, this latest revelation will be deeply felt.

“I am writing to the Foreign Secretary about this matter and will raise it in the House of Commons. I expect a full explanation.” In a separate radio interview Watson commented on Monday, “It appears that documents have been released by the government under the 30-year rule and it shows top secret papers from Mrs Thatcher authorising the SAS to collude with the Indian Government on the planning of the raid on the Golden Temple….

“I was genuinely surprised and ..on behalf of my constituents l was also upset and deeply offended that we would be involved with what turned out to be a raid that caused huge loss of life and political tensions ever since…”

Asked to comment on the documents, a spokeswoman for the Foreign and Commonwealth Office told The Tribune: “We are waiting for verification.”

The SAS is the acronym for Special Air Service, the elite special forces of the United Kingdom, which is primarily tasked with counter-terrorism operations in peacetime and special operations in wartime. There are three regiments of the force, which has taken part in a number of military operations the world over, including in the Falklands, Afghanistan and Iraq. A number of special forces of different countries have been modelled on the SAS, which goes by the motto “Who Dares Wins”.

Previous: Set norms for appointing jathedars: Sikh leaders
Next: 8 Punjab cops get life term for eliminating a Sikh youth in a 1992 case