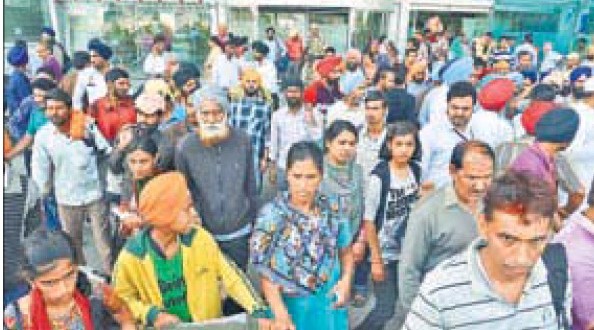 Amritsar, Punjab: Evacuees from floodravaged Jammu and Kashmir continued to land at Sri Guru Ram Dass Jee International Airport in the holy city on Monday, where the administration and the Shiromani Gurdwara Parbandhak Committee (SGPC) have made elaborate arrangements for them.

On Monday, the India Air Force (IAF) brought in 252 people, a majority of whom were migrant labourers from Bihar and Uttar Pardesh, who found themselves jobless in flood-hit J&K. Having been rescued by the army from various places, including Srinagar, these labourers heaved a sigh of relief as the IAF plane landed here.

A couple of families from Punjab, who had gone on a holiday to the Kashmir Valley, also returned. Many of them broke when they saw their kin at the airport. In the meantime, the administration has made arrangements for their stay at various guest houses in the city and tickets for their onward journey to their respective home states are also being provided by the administration.

According to airport sources, another 1,000-1,500 people are expected to be airlifted from Srinagar to Amritsar late on Monday evening or at night.

The SGPC continued with the task of evacuating people from Srinagar on its own expense.Another 88 peopel, mostly labourers from Punjab who had taken shelter at a gurdwara in Srinagar, were brought back on a Spice Jet aircraft.

The SGPC has so far evacuated 197 people from Srinagar. The total number of evacuees landed here reached 2,549.

He said the team would be stationed at Gurdwara Shahdeed Bunga Sahib near Srinagar. He said the SGPC would continue dispatching ratio and other articles needed by the flood-affected people.

The SGPC has also accommodated many flood-victims at its at its ‘serais (inns) located in and around the Golden Temple complex.