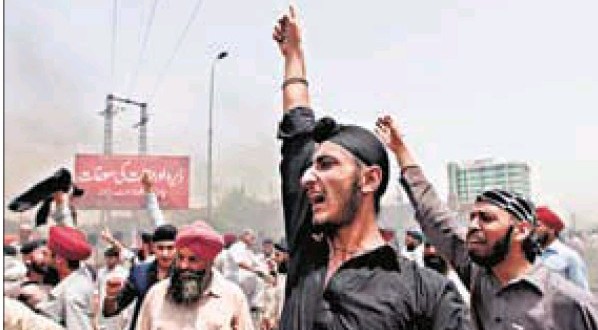 Islamabad, Pak: Two members of Pakistan’s Sikh community in the Khyber-Pakhtunkhwa province died in an attack by unidentified persons on Wednesday.

The attackers opened fire on three Sikhs in a busy Peshawar market area. One person died on the spot while another died after being rushed to the local hospital. According to a PTI report, one of the Sikhs killed was identified as Jagmot Singh.

All three Sikhs were shopkeepers in the Hashtnagri area of Peshawar. One owned a cosmetic store, while another had a mobile phone shop. Following the attack, members of the Sikh community came out on the city’s main streets and blocked traffic in protest.

Police said the attack could have been the work of militant organisations which usually target businessmen for protection money. At the same time, they did not rule out an attack by religious organisations targeting members of a minority community. So far, no organisation has claimed responsibility.

It is common for businessmen in Peshawar to get notes demanding protection money. In many instances, when the businessmen do not comply, their shops are targeted. Khadim Hussain of the Ariana Institute, which works on issues that relate to the Khyber-Pakhtunkhwa province, says that in the case of the Sikh community, they are seen as easy targets. “The police are not that keen to look into their complaints and they are seen by many as a prosperous community.”

The latest incident illustrates growing fears of religious minorities in Pakistan, commented Zohra Yusuf of the Human Rights Commission of Pakistan. The Sikh community has come under increased attacks over the past years, with many having to leave their ancestral villages in the province and shift to urban areas for protection and safety. Most Sikhs in the province are involved in business, which makes them an easy target for extortionists, say police officials.

Many Sikhs have migrated to Rawalpindi and Hasan-Abdal in Punjab from the KhyberPakhtunkhwa province province after being targeted for ransom in the past year. In February, two Sikh businessmen were kidnapped from Dera Ismail Khan and released after Rs 40 lakh were paid to the kidnappers.

After the military operation started in northern Waziristan in Pakistan, hundreds of Sikhs were among those who fled the fighting in tribal areas. Many families ended up at the Hasan Abdal, where the Gurdwara Panja Sahib is located. Here, they are taken care of by the local Sikh Gurdwara Committee. Sardar Soran Singh, a special assistant to the KhyberPakhtunkhwa chief minister, told members of his community that all efforts would being made to ensure that they remained safe. But this did not stop the community members from venting their anger.

On Wednesday, several dozen Sikhs tried to enter the KhyberPakhtunkhwa provincial parliament building but were prevented from doing so by the local police. In May, dozens of angry Sikhs stormed the national parliament complex in protest against several instances of alleged desecration of their holy book over the past few years. Officials say that Pakistan is home to over 20,000 Sikhs.