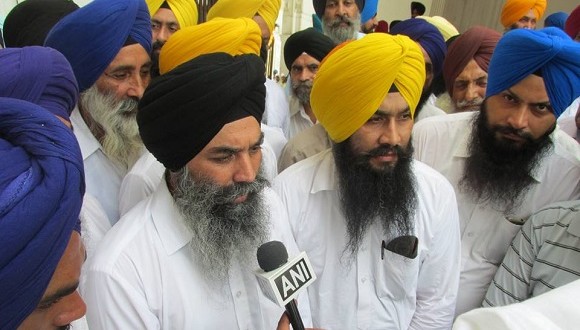 Amritsar, Punjab: Victims of the 1984 anti-Sikh pogroms launched the “Torch of Justice” after paying obeisance at Akal Takht, the highest temporal seat of Sikhism here on Friday. Speaking on the occasion, All India Sikh Students Federation (AISSF) president Karnail Singh said that on October 1st, AISSF and 1984 survivors would start their journey carrying the “Torch of Justice” from Delhi to United Nations headquarters in New York. He said that a month-long “Torch of Justice” campaign would pass through all the states where Sikhs were massacred during November 1984.

A delegation of survivors and human rights activists would carry the “Torch of Justice” from Delhi to New York reaching the UN headquarters on November 3. He said that despite the recommendation of the Nanavati Commission, successive governments allegedly shielded high-ranking Congress leaders from prosecution for their role in November 1984. “We will be carrying the Torch of Justice to United Nations in New York to highlight the three decades of impunity to those who orchestrated violence against Sikhs,” he said. He said that in 2005 Justice Nanavati Commission reported that the 1984 violence against the Sikh community was well-planned and organized by Congress leaders.

Justice Nanavati recommended prosecution and filing murder charges against Congress leaders Jagdish Tytler, Sajjan Kumar and others for inciting and leading death squads that killed Sikhs the during November 1984 Sikh massacre. A delegation of AISSF and “National November 1984 Victims Justice and Welfare Society” would join New York-based human rights group Sikhs for Justice (SFJ) in submitting a report to Ivan Šimonovic, UN assistant secretary general for human rights. “The report ’1984 Sikh Genocide’ will carry details of systematic, organized and deliberate killings of Sikhs in 19 states, eyewash investigations by the government and zero convictions by the courts,” he said.